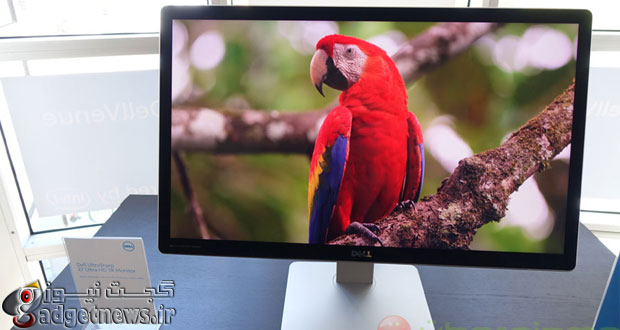 What’s 27 inches across and has almost twice the pixel count of your puny 4K monitor? Dell’s new UltraSharp 5K monitor, that’s what. With a resolution of 5120×۲۸۸۰, the 27-inch monster has seven times as many pixels as your 1080p monitor, or four times as many as your 2560×۱۴۴۰ (۱۴۴۰p) monitor. It has a PPI of 218, which puts it on about par with the 15-inch MacBook Pro with Retina display (2880×۱۸۰۰). When it goes on sale around Christmas time — for $2500 — it will finally replace IBM’s mythical 13-year-old T220/T221 as the highest-res desktop monitor.

The Dell UltraSharp 27 Ultra HD 5K monitor, to give its full name, is, unsurprisingly, a workstation-grade piece of hardware. It has all the usual trappings of a professional monitor, such as Dell PremierColor calibration, and an anti-smudge/anti-reflective coating. There’s six (!) USB ports and a media card reader, too. Curiously there’s also two integrated 16W Harmon Kardon speakers for some reason — presumably because Dell thought you should get a little extra if you spend $2500 on a monitor.

Read our featured story: No, TV makers, 4K and UHD are not the same thing

At 5120×۲۸۸۰, Dell’s new monitor has a total pixel count of 14.7 million (14,745,600 to be exact). A 4K monitor or TV, by comparison, clocks in at just 3840×۲۱۶۰ – ۸.۳ million pixels. Your puny 1080p monitor or smartphone has just 2 million pixels. 5120×۲۸۹۰ at 27 inches works out at 218 PPI — comparable to high-res laptops such as the Asus Zenbook or Apple Retina MBP, but lower than the 300+ PPI of modern tablets and smartphones. Most importantly, though, 218 PPI is more than double your current 22- or 24-inch desktop monitor, which is probably sitting at around 100 PPI.
Dell UltraSharp 27 Ultra HD 5K monitor, side, portrait mode

As for how Dell got to 5K when everyone else is just starting to hit 4K, we have to do a little guesswork. As far as we’re aware, no one is actually making 5120×۲۸۸۰ panels, especially not at 27 inches diagonal– so what we’re probably looking at is two 2560×۲۸۸۰ panels squished together as a “tiled display.” This is the same approach that we’ve seen with some 4K monitors, which use two 1920×۲۱۶۰ panels rather than a single 3840×۲۱۶۰ unit. In the case of Dell’s 5K monitor, it is probably driven via two DisplayPort 1.2 connectors with Multi-Stream Transport (MST).

The 22-inch IBM T221 3840×۲۴۰۰ LCD monitor, circa 2003. Only now, 11 years later, will there finally be another desktop monitor with comparable resolution.

If Dell’s UltraSharp 27 Ultra HD 5K monitor really is a tiled display, then that just reaffirms that is for professional users who need as much resolution as possible — and not for gamers. With 2880 vertical pixels, the Dell 5K screen will be amazing for looking at entire websites or page layouts without having to zoom or scroll. 5120×۲۸۸۰ is close to the resolution of top-end DSLRs, too. I’m sure some gamers will be tempted to pick one up, but considering the poor state of 4K gaming — both in terms of raw GPU grunt and software support — and the fact that the Dell 5K monitor has almost twice the number of pixels, you better have one hell of a rig. Two Radeon R9 295X2s ought to do it.

The Dell UltraSharp 27 Ultra HD 5K monitor should be out in time for Christmas, priced at $2500. Yes, it seems those high-res desktop monitors, which have been surprisingly absent for so many years, are finally coming. If you’ll excuse me, I’m going to go and start writing a letter to Santa. 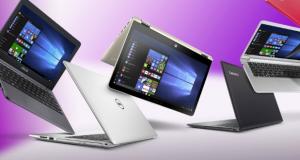 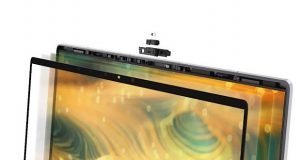 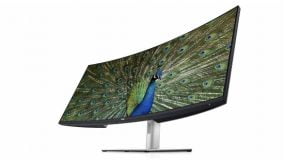