The New Zealand Global Rallycross driver gets his tyres smoking in the United States capital.

As one of the top rally and drift drivers in the world – and a former Pikes Peak International Hill Climb record holder to boot – Rhys Millen has travelled just about everywhere. But until this week, the New Zealand-born driver had never been to Washington DC. He made his first trip a memorable one.

Ahead of the Red Bull Global Rallycross race in the city this weekend, Millen and his 600-horsepower Hyundai Veloster were escorted from one iconic Washington monument to another by the official Presidential motorcade.

And although he may have been given the visiting dignitary treatment, Millen’s progress was far from stately, as he showed Washington’s residents just why he’s got the nickname ‘Mad Skills’.

During the action-packed shoot, Redbull.com spoke to Millen about his first visit to Washington and the upcoming Red Bull Global Rallycross Championship race and season ahead.

What’s your impression of the city, Rhys?
It’s a bit of an eye opener for sure. It’s an amazing opportunity, not only to be here but to be here in this manner. Seeing the Washington Monument, the White House, Capitol Building – all structures that I’ve seen in films and images and now to be standing in front of them wearing a race suit, and having a racecar there is kind of a surreal moment. And on top of that, to have some six city blocks closed down on a summer Sunday and nobody around but us and a film crew is kind of like a ghost town sort of thing. Just an incredible opportunity and one that I’ll cherish for a long time.

Even during the planning stages, did you have idea of what you wanted to do around certain places?
No – I was pretty nervous throughout the entire shoot. With the level of police that we had and how intense they are toward the general public and making sure everyone was safe, this was definitely one place I didn’t want to make a mistake – you definitely wanted to stay between the lines! But we took the most of the elements and the opportunities we were given.

Now that we’re into the proper Red Bull Global Rallycross season after Top Gear Festival Barbados and X Games, what’s your outlook?
I’m excited. The car is working incredibly well. We qualified a couple of tenths off pole at X Games and won the first heat race. So we’re really excited for not only GRC DC here but for the remainder of the season.

You’ve got a new team-mate in Emma Gilmour. How’s that been going?
She’s doing really great. There’s a lot for her to adapt to on the car. She is a rally driver in New Zealand. Everything is a little bit flipped for her there. Right-hand drive with a standard H gearbox, and now she’s popping into left-hand drive with nearly double the power and a sequential gearbox, so it was a big eye opener for the past two events but I think she’s going to settle in real well this weekend.

Any races coming up that you’re really looking forward to?
I’d say my favourite track would have to be Snoqualmie, up in Seattle, Washington. It’s probably the most balanced towards a dirt-driving style or a gravel-driving style. A lot of the other tracks are more pavement-based with a greater percentage of pavement on the course layout, which we’ve adjusted the car to very well. But still, the majority of my background and roots is on gravel so we’re excited to get a car that was designed for gravel back on gravel. 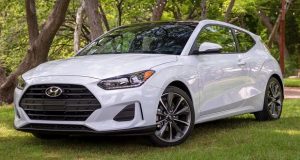 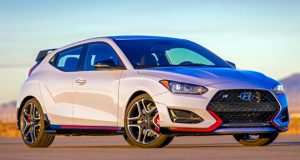 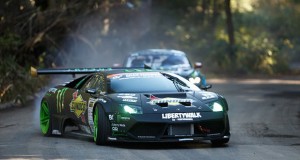