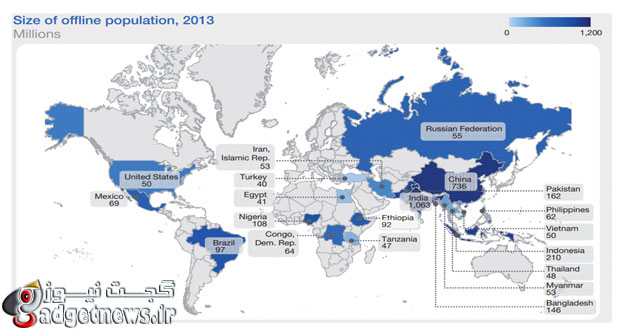 ۴.۴ billion people around the world still don’t have Internet. Here’s where they live

۴.۴ billion people around the world still don’t have Internet. Here’s where they live

The world wide web still isn’t all that worldwide.

An exhaustive new study by McKinsey & Company (really, it’s 120 pages long) about the barriers to Internet adoption around the world illuminates a rather surprising reality: 4.4 billion people scattered across the globe, including 3.2 billion living in only 20 countries, still aren’t connected to the Internet.

The sheer number of people unconnected in some countries is staggering. India is home to nearly a quarter of the world’s offline population; China houses more than 730 million; Indonesia 210 million; Bangladesh almost 150 million; and Brazil nearly 100 million. Even in the United States, 50 million people don’t use the Internet (though, as my colleague Caitlin Dewey points out, many of those who are offline in the United States are offline by choice).

But adjusting for size, and instead looking at the percentage of people in certain countries that still aren’t connected to Internet, shows that quite a few places have very little internet penetration at all. In Myanmar, 99.5 percent of the population is offline; in Ethiopia, almost 98 percent; in Tanzania, more than 95 percent; and in the Democratic Republic of the Congo, just under 95 percent.

Most of the world’s offline population, some 64 percent, live in rural settings, where poor infrastructure, health care, education, and employment, impede Internet adoption, the study says. In India, for instance, roughly 45 percent of the population lives without electricity, making Internet access all the more unthinkable.
But it’s a marker of inequality, too. Especially in countries like the United States where the barriers to Internet adoption are comparatively low. “Addressing the widening gap between the rich and poor in the United States could help improve affordability of Internet access for those at the bottom of the pyramid,” the study notes.

And education: Roughly 900 million of people who aren’t connected to the Internet are illiterate.

Those still without Internet are also, and rather counterintuitively, predominantly young. More than 80 percent of people who aren’t connected to the Internet are younger than 55 years old, and more than 42 percent of younger than 25 years old. That includes children, some of whom can’t hold a mouse, let alone manage a modem. But it also means that elders who aren’t savvy with computers comprise a small percentage of the people who still aren’t connected.

While the ۴.۴ billion who still live without Internet will gradually join the web as economic, infrastructural, and social barriers fall—۱.۸ billion, after all, have connected since 2004—we are still a long ways off from the sort of worldwide connectivity that many, including Google’s Eric Schmidt, have spoken of in recent years.