Did Life Start on Mars?

Not only was Mars once much more like Earth, with atmosphere, surface water and warmer temperatures, but it had a potentially key ingredient for life that was not available on our home world.

That buttresses a mind-bending theory that life got its start on Mars and then spread to Earth, said biochemist Steven Benner, with the Foundation for Applied Molecular Evolution in Gainesville, Fla.
VIDEO: Curiosity Rover Finds Possible Life on Mars

Today, Mars is a cold, dry desert with a thin atmosphere that provides little protection from deadly solar and cosmic radiation.
Play Video
The Cost of Living on Mars
Relocating to Mars is expensive business!
James Porto/Taxi/Getty Images

But roll back the hands of time some 4 billion years and Mars had at least a polar ocean and abundant supplies of liquid water.

“About 3.4 billion to 4 billion years ago … was the time that life was evolving on Earth,” planetary scientist Carol Stoker, with NASA’s Ames Research Center in Moffett Field, Calif., said at a Mars science conference earlier this month.

“The environments were similar enough that if life evolved on Earth in these conditions, why wouldn’t it have happened on Mars?” she said.

Benner and colleagues suggest the reverse might be true. They point to an element called molybdenum, an oxidized version of which may have been crucial for life to evolve.
PHOTOS: Weirdest Mars Craters Spotted by HiRISE

The problem is 3 billion years ago, Earth didn’t have enough oxygen for molybdenum to form into the highly oxidized mineral believed to be necessary for life.  But it could have on Mars, Benner said.

The molybdenum issue is part of a larger, more complicated puzzle about how the chemistry for life assembled and evolved.

Another factor in Mars’ favor is that the planet had ample dry lands where life's chemistry could cook, while early Earth may have been too wet.

Benner presented his findings at the annual Goldschmidt conference in Florence, Italy, on Wednesday. 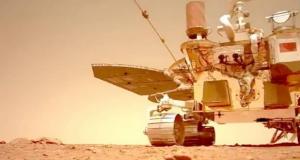