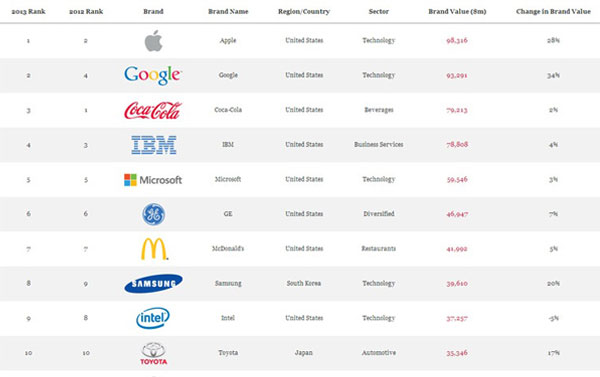 he report, to be released on Monday, is from Interbrand, a corporate identity and brand consulting company owned by the Omnicom Group that has been compiling what it calls the Best Global Brands report since 2000. The previous No. 1 brand, Coca-Cola, fell to No. 3.

Not only has Apple replaced Coca-Cola as first among the 100 most valuable brands based on criteria that include financial performance, this is the first time that the soft drink known for slogans like “It’s the real thing” has not been No. 1.

Apple’s arrival in the top spot was perhaps “a matter of time,” Jez Frampton, global chief executive at Interbrand, said in a recent interview. Apple was No. 2 last year, climbing from No. 8 in the 2011 report.

The 2013 report begins: “Every so often, a company changes our lives, not just with its products, but with its ethos. This is why, following Coca-Cola’s 13-year run at the top of Best Global Brands, Interbrand has a new No. 1 — Apple.”

The report estimates the value of the Apple brand at $98.3 billion, up 28 percent from the 2012 report. The value of the Coca-Cola brand also rose, by 2 percent to $79.2 billion, but that was not sufficient to give Coca-Cola a 14th year as Interbrand’s most valuable brand.

Although “Coca-Cola is an efficient, outstanding brand marketer, no doubt about it,” Mr. Frampton said, Apple and other leading technology brands have become “very much the poster child of the marketing community.”

That is underscored by the brand in second place in the new report: Google, which rose from fourth place last year. In fact, of the top 10 Best Global Brands for 2013, five are in technology: Apple; Google; Microsoft, No. 5, unchanged from last year; Samsung, 8, compared with 9 last year; and Intel, 9, compared with 8 last year.

Samsung’s ascent followed the company’s adoption of a new brand strategy called the Brand Ideal, which includes “a greater focus on social purpose,” Sue Shim, executive vice president and chief marketing officer at Samsung, said by e-mail. That reflected research indicating American consumers would switch brands to “one that was associated with improving people’s lives,” she added.

“Brands like Apple and Google and Samsung are changing our behavior: how we buy, how we communicate with each other, even whether we speak with each other,” Mr. Frampton said. “They have literally changed the way we live our lives.”

Among other transformative technology brands that performed well in the new report was Facebook, which climbed to 52 from 69 last year, its first year on the list.

However, not all technology brands fared well. BlackBerry, which tumbled last year to 93 from 56 in 2011, has disappeared from the list. And Nokia, which dropped to 19 from 14 in 2011, finished this year in 57th place — “the biggest faller” among the 100, Mr. Frampton said.

Among nontechnology brands, a notable addition to the list was Chevrolet, at 89, the first General Motors brand to rank among the Best Global Brands.

“It feels good to hit the list for the first time,” Alan Batey, global head of Chevrolet at G.M., said in a telephone interview. “It’s a great first step, but we’ve got a long way to go. There are a lot of big brands in front of us.”

The milestone reflects how General Motors has been “making a conscious effort to globalize Chevrolet,” Mr. Batey said, selling the brand in 140 countries in ads that play up attributes like “value for money and designs that move hearts and minds.”

Commonwealth, the creative agency for Chevrolet, “played a key role” in helping the brand make the list, he added. Commonwealth is part of the McCann Worldgroup division of the Interpublic Group of Companies.

Last year, when Coca-Cola finished atop the Best Global Brands list for the 13th consecutive time, an executive at the Coca-Cola Company acknowledged the streak but noted that “nothing lasts forever.”

A year later, the executive, Joseph V. Tripodi, executive vice president and chief marketing and commercial leadership officer, had this reaction: “Of course, we would like to remain on top of the list forever. That said, we are honored to continue to be included among such an esteemed group of global brands, and we congratulate Apple and Google, both valued partners of ours.”

“We’ve seen the value of technology brands rise as they create new ways for people to stay connected virtually,” Mr. Tripodi said by e-mail. “We understand this, as the lasting power of our brand is built on the social moment of sharing a Coca-Cola with friends and family.”

“Creating these simple moments and delivering on our brand promise each and every day remains our focus,” he added, “as we continue to grow the value of brand Coca-Cola for decades to come.”

If it is consolation, Coca-Cola remains far ahead of Apple and Google in likes on Facebook fan pages. Coca-Cola has 73.2 million, compared with 9.8 million for Apple and 15.1 million for Google. 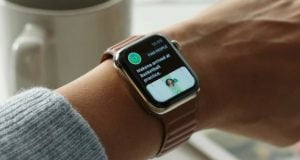 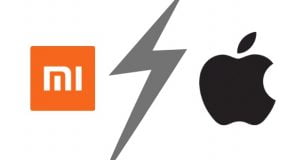