Is a Large Asteroid Headed for Impact With Earth in 2880?

Scientists have identified a thousand-yard-wide (one-kilometer-wide) asteroid that may be heading for a collision with Earth—878 years from now.

Using radar and optical measurements made over the past 51 years, researchers have calculated that there is up to a one-in-300 possibility that Asteroid 1950 DA will slam into Earth on March 16, 2880. Their work is published in the April 5 issue of Science.
"We calculated the probability of collision based on what we know about the physical aspects of the asteroid and many other factors," said Jon Giorgini of NASA's Jet Propulsion Laboratory at the California Institute of Technology in Pasadena. "As we get more information we will be able to adjust the level of probability up or down."

Odds of one in 300 may seem almost insignificant, but it is the highest Earth-impact potential ever assigned by scientists to an object in space, according to Giorgini.

The consequences of a collision from an asteroid a thousand yards in diameter are speculative. Could a direct hit destroy an entire city? Would an ocean impact create a massive tsunami capable of deluging adjacent coast lines?

"Nothing good can come from such an impact," said Giorgini. "But a collision between 1950 DA and Earth is so unlikely it is not worth worrying about. And even if it does look like there could be a collision, we have plenty of time and many ways to deflect the asteroid from its path."

One of the easiest ways to deflect the asteroid past Earth would be to alter its surface, changing the amount of heat energy it radiates, said Joseph Spitale, a research associate in planetary science at the University of Arizona–Tucson. That would have the effect of subtly altering the way the asteroid moves, causing it to slowly change its trajectory.

In a separate paper published in Science, Spitale describes how the so-called Yarkovsky Effect could be used to make an asteroid drift off its path. The Yarkovsky Effect is a term used to describe how an asteroid's trajectory can be influenced by its heat radiation.

"The thermal emission from an asteroid acts like a rocket force in the opposite direction, although it is really, really weak," Spitale said. "If we can somehow change the thermal radiation being emitted by an asteroid, we can affect the object's orbit. A tiny thrust acting over a long time can be enough to nudge an asteroid from a path heading towards the Earth to one that narrowly misses the Earth."

Because the Yarkovsky Effect is completely determined by temperatures on the surface of a body, Spitale explained, it can be manipulated if the surface can be altered in a way that changes that temperature distribution.
Asteroid 1950 DA "looks like a good candidate to test the Yarkovsky Effect," he added. "We have a really long base line in time and we are able to predict its orbit over that time."

To use the Yarkovsky Effect to nudge 1950 DA off its course would require doing something on Earth to change the asteroid's surface temperatures.
"I think people will come up with all sorts of creative ideas about that," Spitale said. "For example, if we could cover the surface of the asteroid with one centimeter (half an inch) of dirt, that would plausibly be enough to change the Yarkovsky Effect quite a bit. Of course, that's a lot of dirt and it would probably require a couple of hundred rockets to get it all up there. It would be really expensive."

Another possible solution, Spitale said, would be to "paint" the asteroid's surface white. "That would make a big change to the way the object reflects sunlight. That might require a thickness of only one millimeter or so (less than a 20th of an inch) over the entire surface," he said.

A third solution might be the use of conventional explosives. One rocket might be enough to complete the job, and getting it there would certainly be possible using current space technology.

The last approach would be the cheapest solution, Spitale said. "Unfortunately, you would probably lose most of the debris to space," he said. "However, this approach might alter the character of the surface in some other useful way."

How to push 1950 DA away from the Earth—and whether it will ever be necessary to do so— depends entirely on the exact physical nature of the asteroid, said Giorgini. "We won't know for sure whether this asteroid is on a collision course until we can determine which way its north pole is pointing."

Current calculations are based on all the possibilities, and the outcome of these scenarios, he noted, ranges from a zero to 0.33 percent probability that there will be a convergence in the orbits of Earth and the asteroid.

This is the first time such a wide array of factors has been taken into account in predicting an asteroid's orbit, Giorgini said.

He and the other researchers looked at not only the asteroid but also factors such as the gravitational influence of other asteroids, the shape of the sun, and the effect of solar wind (the forces created by light and heat from the sun).

The asteroid can be seen visually through telescopes as a moving point of light. Only through radar, however, can scientists determine the nature of its surface and how it spins.

Because the asteroid needs to be fairly close to Earth for radar to be effective, opportunities to study it with this technology are rare. Astronomers can use telescopes to observe the asteroid at greater distances before it fades from view.

The next time scientists will be able to use radar to study the asteroid will be in 2032. But Giorgini said astronomers will get an optical view of the asteroid in about five or six years, when there may be an opportunity to learn more about its physical aspects.

"We need to know how it spins, its mass, its exact shape, and the patterns of darkness and lightness on its surface," Giorgini said. "If we can't get this information from our telescopes, then the only way to do it will be to send a spacecraft to go and take a look at it." 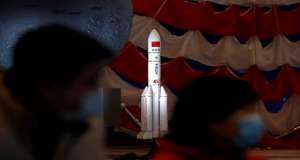 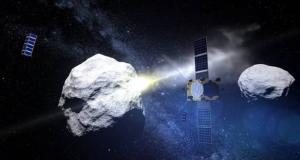