Renault’s recent unveiling of the Megane lineup at the 2013 Frankfurt Motor Show was a welcome surprise, not only for its customers, but for the Mega Mega ne itself. If that car could talk, it probably let out a huge shriek the moment Renault decided to give it that much-needed facelift.

Now, it’s the Megane Coupe-Cabriolet’s turn and like the top-range RS 265 we saw at Frankfurt, the Megane CC comes with an all new face that made use of the company’s new design philosophy and in doing so, threw away the bland, happy-to-be-there look of its predecessor.

It’s a lot more dynamic and nicer to look at, even though it still doesn’t blow you away. Then again, Renault will take its spoils, one small increment at a time. And it’s not like the coupe-cabriolet market is rife with competition these days. The Volkswagen Eos , a key competitor, is on its way out and the Mazda MX-5 Miata , despite its popularity, has been around longer than a lot of the Bieb’s Beliebers have been alive.

So it’s a good time for Renault to give the Megane CC a facelift. Hopefully for the French brand, it translates to more sales, too.

There are times when a change just has to happen. Even the subtlest ones, when done properly, will completely change the perception of a specific model. That’s what we think of the Megane Coupe-Cabriolet.

The 2010 to 2013 models of Renault’s sports roadster had their merits, but one that didn’t translate well as the years went by was its looks. So with a new design philosophy in its stable, The French brand decided that it was high time to use it on the Megans. And to that we say: "high five!"

The front fascia is now more dynamic than it ever has been, a testament to the company’s evolution and the senses to adapt it to the Megane. The larger Renault logo is a welcome change from the miniscule one in the previous models. The way the grilles also extend into the headlights convey a more symmetrical appearance to the Megane CC’s face. The front splitters are also now bigger with Renault smartly using the newfound space to install fog lamps, and a horizontal bar to complement the changes done on the grille lights.

Moving out of the front end, it’s nice to know that Renault will continue to equip the Megane CC with a panoramic glass roof as an added option, although standardizing it, together with the removable mesh deflector screen would have been a lot better.

The Megane CC still looks a little chunky, but we doubt that will be an issue for other customers given that rather subjectiveness of the word. It was the front end that needed all the help it could and Renault addressed it properly.

In the end, that’s all you could ask for.
Interior

The interior of the 2014 Megane CC was kept unchanged so much so that the shapes of the A/C vents are almost identical with the 2010 model. But we’d be nitpicking if we call Renault’s attention to that. In the bigger scheme of things, the lack of changes is actually a plus because the cabin from previous models already looks clean and less cluttered than what you’ll find in other models. Every component is placed where they should be and within reach of both the driver and the front passenger.

The biggest upgrade to the cabin is the addition of the R-Link multimedia system which encompasses a 7-inch display controllable via a joystick mounted on the center console. It should keep the Megane CC up to the times as far as technological gizmos and user-functionality is concerned.

The last important thing about the Megane CC is the rear space, which quite frankly isn’t a lot. When the roof is down, there’s a 211 liters of boot space available and, with the roof up, the space becomes 417 liters. Nevertheless, there’s not enough space for full-sized adults to sit in the back and say that they’re comfortable doing so.
Drivetrain

The 2014 Megane CC gets the benefit of receiving a whole bunch of Renault engines, allowing customers their choice of power that suits their needs. The 1.4 is the base, coughing up a pedestrian 99 horsepower. Then there’s the 2.0DCi that nets 158 horsepower, followed by the 2.0 turbo engine that cranks out 165 horsepower.

If you’re looking for the most ideal one in our book, opt for the DCi powertrain and its 158 ponies. It gets you decent enough speed off the block (0 to 62 mph in 8.7 seconds), has an impressive 130 mph top speed that you can enjoy with the top down, and returns reasonable fuel efficiency. Don’t be swayed by the extra horses on the turbo engine; you’re better off with the DCi because it packs a little more bang for your buck.

Like every car with a folded roof, you’re going to feel the added weight when you’re putting your foot to the pedal or when you’re turning into fast bends. That’s a curse that every car with this configuration must deal with and Renault did as much as it could to address it. The car also changes direction a little too slow to our liking, but when it’s running on blast, it’s a real treat to drive.
Pricing 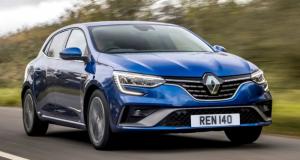