The Consumer Electronics Show takes place every January in Las Vegas, and it's the ultimate collection of new technology — good and bad.
It's that magical time of year: Lists are made and checked twice, little eyes sparkle with anticipation, and countless children (at heart) prepare for the unveiling of something new and incredible.

I speak, of course, of the Consumer Electronics Show, where manufacturers from around the world show off their upcoming products.

۱. Samsung and LG labeling everything "World's First" or "World's Biggest"
These two companies certainly didn't start the hyperbolic adjective game, but they've definitely "perfected" it. Born of their intense rivalry and hatred, expect to see both companies saying something like "World's Biggest 78-inch OLED." Is there a smaller 78 inches?

Both companies have a lot to be proud of, and have many legitimate firsts. But I'm reserving the right to roll my eyes at the ridiculous parts.

۳. Headphones
There are few electronics categories showing as much growth as headphones. You can thank Beats and their billions spent on marketing for the explosion of headphone popularity.

No snark here, actually. This is awesome. There are so many amazing headphones available right now. A lot of crap, too, but we're in a golden age of headphones of all types. They also have a lot of markup, making companies happy. Win-win for everyone.

۴. Gaping holes where plasma should be
OK, not literally, but what is Panasonic's booth going to look like now that they're pulling out of plasma? Lots of LCDs, presumably, and hopefully the sixth item on this list.

۵. More Ultra HD 4K
I give up. I'm not going to talk about 4K anymore. I've said my piece, multiple times, and all I've gotten for it, for trying to save people some money and get better, cheaper TVs for everyone, is hatemail, personal attacks, and being made fun of because I wear glasses. Fine. You win. I'll say no more.

۶. OLED, OLED, OLED
Bigger, smaller, cheaper, better — bring on Oh-Lead. We got our first taste this year and it was oh, so good. Expect to see a variety of sizes, lower prices, and, potentially, flexible TVs. It may be sad to break up with plasma, but we'll seek solace in the arms of the better looking and sexier OLED. Did it just get weird? A little.

Bottom Line
I have a love-hate relationship with CES. But for all the noise, smells, hassle, nonsensical pomp, and illogical circumstance, it's still pretty cool, and a lot of fun. 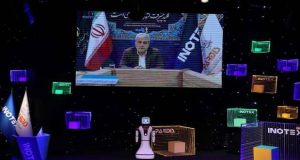