Clearly Sonos, Samsung's been peeking at your Play:1 playbook. After introducing the Shape wireless streaming audio system and the M7 speaker mere months ago, the Korean company is now ready to reveal a new, smaller member of the family, the M5, at CES. This new model has only three drivers (down from the five inside the larger M7), but still packs the same wireless audio tech as its elder — meaning it's controlled by the Shape mobile app, connects to your local network through a Shape hub wired to your router and automagically fits into your existing system, whether it's a multi-room or multi-channel setup. Additionally, Samsung's cooked up a connect box that hooks up with old school analog speakers and loops them into the Shape system so they can be wirelessly controlled too.

Plus, Samsung's crafted a pair of Shape-compatible soundbars, the HW-H750 and the HW-H600. The H750 soundbar pumps out 320W of sound and is built to sit beneath the largest of TV's (curved or otherwise), while the H600 sound stand is designed so that smaller 32-55 inch TV's sit directly on top of it while it pumps out multi-directional 4.2 channel audio.

Alongside those offerings, Samsung will be showing off a new HT-H7730WM home entertainment system at CES as well. The system comes with six speakers, one subwoofer, a Blu-ray player capable of upscaling to UHD (4K) resolution and an amplifier packing both analog vacuum tubes and digital amps. Additionally, despite having 6.1 speakers, the system delivers up to 9.1 channels of sound using the new DTS Neo: Fusion II codec.

Lastly, Samsung's latest GIGA system will make its debut in the Nevada desert, the MX-HS8500. With 2,500W of power and twin 15-inch subs at its disposal, it's got enough thump to wake the neighbors, but it's not meant for home use as it's been built to travel. That's right, this GIGA's got wheels and a retractable handle, so you can more easily take it with you to your next tailgate party. Plus, it still has the same visual flair as previous GIGA systems, meaning it has fifteen different lighting effects settings to please partygoers' eyeballs. And, the HS8500 utilizes Samsung's Bluetooth Hi-Fi wireless audio streaming tech to stream sound from the company's compatible TVs. Of course, audio gear must be heard to in order to be fully appreciated, so rest assured we'll be listening to all of Sammy's new audio offerings at CES next week. Stay tuned. 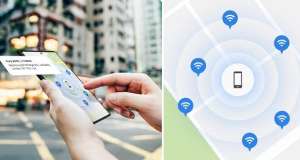