Gigabyte’s X7 gets an upgrade since it first appeared at CES 2014, while the X3 Plus makes a claim for a “world’s most powerful” status.

Gigabyte has previewed two of its latest AORUS branded gaming laptops at the opening press conference of Computex, the 17.3-inch AORUS X7 and the 13.9-inch AORUS X3 Plus.

Gigabyte is particularly well regarded for its specialist motherboards for enthusiasts and over-clockers, as well as its keyboard and mouse accessories for the gaming market. While it doesn’t sell nearly as many notebooks as some, its line up is very much targeted at the high-end gaming market.

The X7 is an impressively rapid refresh of the machine of the same name launched at this year’s CES. The X7 has been updated across its dual graphics to the new Nvidia GeForce GTX 860M (powering a Full HD screen), faster RAM, a better fourth generation Core i7 processor and up to four forms of internal storage (three SSD, one HDD).

The X3 Plus is the most interesting new arrival, a 13.9-inch notebook that Gigabyte claims is the “world’s most powerful” for its size. The X3 Plus packs a brilliant 3,200×1,800 resolution screen, remarkable at this size. The screen also uses IGZO TFT panel technology to deliver better colour performance.

Driving all those pixels is fourth-gen Core i7 processor, 8GB RAM (upgradeable to 16GB) and an Nvidia GeForce GTX 870M graphics card with 6GB GDDR5 RAM on board. Serious grunt for such a small package.

The X3 Plus weighs in at 1.83kg, making it a smartly balanced notebook for being a powerful gaming machine while also being genuinely portable.

Pricing has yet to be announced for these new models. We’ll find out more when we see them on the show floor. 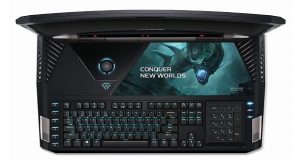 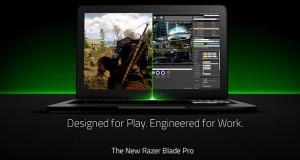