You can either admire or fear the ocean because of its many bizarre, yet undeniably enchanting and mysterious, phenomena. One of these is the rare phenomenon of Frost Flowers, which are ice crystals forming on young sea ice or thin lake ice and on the border between the air and the sea. As you witness them bloom, it is as if you are brought into a magical place. Another is the bioluminescent bloom, where the shoreline literally glows brighter than the stars above it. On the other hand, some of these phenomena are a source of fear, such as the Maelstrom whirlpool, which is ten times more powerful than the strength of a normal current! Be amazed on what nature can do in this list!

The bizarre phenomenon of red tide is also commonly known as the algal bloom. It happens when the estuarine, marine, or fresh water algae storm rapidly in the shores which results to a discoloration of the surface water, mostly in the coastal waters. Although it is called a red tide, it also comes in varied colors of orange, brown, and even green. These algae are known as the phytoplantons which contain potosynthetic pigments.

Popularized by Edgar Allan Poe's Descent of the Maelstrom, this bizarre phenomenon actually happens in real life. The Maelstrom Whirlpool is a very large and prominently strong swirling body of water, which occurs twice a day in the western area of the Sea of Norway off the north-western coast of the country. Inside the vortex, the water surface turns ten meters lower than the water surface of the ocean. This whirlpool is very powerful as it is has ten times more power than a normal current. Once in every three months, the direction of the current also flows to the opposite way.

Looking absolutely surreal and directly picked out from a Disney romantic scene, this bizarre phenomenon is called Frost Flowers, which are ice crystals forming on young sea ice or thin lake ice and on the border between the air and the sea. This happens when the air is much colder (and dry) than the sea surface and small imperfections in the surface ice starts a domino-like effect where these frost flowers start to grow one by one.

The Devil's Sea is a region in the Pacific about 100 kilometers south of Tokyo, Japan. What makes it bizarre? Aside from being invisible from the map, there are no marine animals living in this area. Storms are also very often to occur, which may start out of the blue and abruptly disappear. There are also about nine ships that disappeared when they sailed within the region. It is also seismically active – the seabed is in motion constantly and volcanic islands appear and disappear out of nowhere.

Another bizarre ocean phenomenon is the cappuccino coast, which is a thick foam forming when the sea water is agitated with the decaying algal blooms or other decomposition products underwater. Because of the swift current, it churns out the water to form foams. Although, generally, this sea foam is not harmful to humans, there still needs precaution when it consists of harmful algal blooms decaying near the shore.

This very rare and bizarre phenomenon when the seas meet can only be observed in the small town of Skagen at the northernmost region of Denmark. There, you can watch your jaw drop as you witness how the Baltic and North Seas meet. How did this happen? Apparently, the two opposing tides cannot merge at this exact point because of their different levels of densities.

A lake under the ocean – now that is really interesting! This bizarre phenomenon is also called underwater lakes or brine pools, which are areas of water with very high levels of salinity or concentration of salt. Because of its extremely high salinity level, it becomes heavier than the normal sea water which prevents the two from mixing together. As a result, it creates a distinct and separate surface, which even has its own waves!

Another bizarre but enchanting ocean phenomena is the bioluminescent bloom, which is a rare phenomenon when a large mass of plankton is washed up to the shore by a single tide. This type of plankton is naturally glowing because it contains photosynthetic pigments. They emit their light as a response when exposed to stress, such as when they are agitated by the current of the ocean or when a paddle slashes through the water.

Another very unusual and bizarre phenomenon in waters are the brinicles, which are commonly found in both the Arctic and the Antarctic. This phenomenon was first filmed by Hugh Miller and Doug Anderson for the BBC One series Frozen Planet in 2011. So how does this happen? It happens when a young sea ice creates a very salty brine which is a lot denser than the normal sea water. Because of this, the brine sinks to the bottom of the water. As it descends, it freezes the surrounding water it comes contact with because it is extremely cold. As a result, it leaves an icy sheath that looks like a tube of ice – called brinicle. When it touches down the bottom of the seabed, the ice also spreads killing everything on its path. 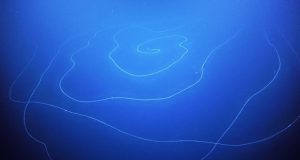 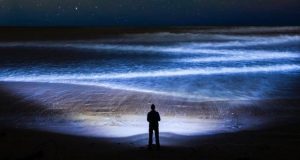